Writing is a hard business. Finding the right words, and making sure their meaning and their sound and their rhythm all merge properly on the page, has been a head-banger since people were scratching on cave walls. Those of us who write stories we make up have one special set of problems, and those who try to research and write the world’s literal truth have another. This blog will be my attempt to share what I’ve learned in more than three decades as a reporter and writer about gathering and organizing information, and then writing it down as clearly as possible.

I’m going to try to do something else as well: discuss how to make a living as a writer. Because as much as writing is a literary act, it’s a mercenary one as well. If we don’t get paid — if we can’t pay the rent and buy groceries and keep the lights on — it doesn’t matter how brilliant we are as observers, investigators, and wordsmiths. It’s the dirty little secret of the literary life: Words are to writers what shoes are to cobblers. We have to produce enough of them and sell them at a high enough price to stay in business. It isn’t easy.

I started writing this blog in 2009, am re-posting it upon request, and I’m writing new posts. The latest is at the top. To read them in order, read from the bottom. If, reading these blog posts, you encounter any that require a password, email me at danbaum@me.com. You can also get new postings in your email in-box by clicking in the Follow box and typing in your email address.

My wife, Margaret, and I both started out as newspaper reporters. Then we were full-time freelance writers, with no other income, from 1987 until taking jobs with an NGO, in 2015. We didn’t live large, but we lived entirely on our writing income, and rarely had to resort to writing stuff we didn’t want to write. We were lucky. But we also were careful never to forget that alongside the responsibility that we have to write the truth and inspire with our words is the equally important requirement to make a buck so we can keep writing. We’ve watched a lot of freelancers fail over the past three decades, and usually it has been not because they failed at the former, but because they lifted the eye from the latter.

If people who claim to love you suggest you minor in accounting  or learn construction skills “so you’ll have a fallback,” remind them that people who have a fallback tend to get the fallback. If you have a parachute in the plane, you’ll use it when the engine catches fire instead of bringing the plane in for a wheels-up landing and saving the lives of everybody else aboard. If you have a lifeboat aboard the Patna, you’ll jump into that instead of toughing out the storm at the helm.*  Need I keep stringing out the metaphors? I think not. You get it: Have no fallback. There’s nothing wrong with learning construction skills or knowing the basics of double-ledger accounting. But if you have your heart set on writing for a living, better to be hungry for a spell and work your ass off at writing than to flop back into something “practical” that you don’t want to do and from which, once you’re accustomed to the regular paycheck, you will find it difficult to extricate yourself. Stay hungry. Let’s begin:

“No man but a blockhead ever wrote, except for money,” — Samuel Johnson.

Now, sit up straight and stop mumbling. Your use of the language is about to improve a lot, whether you like it or not. 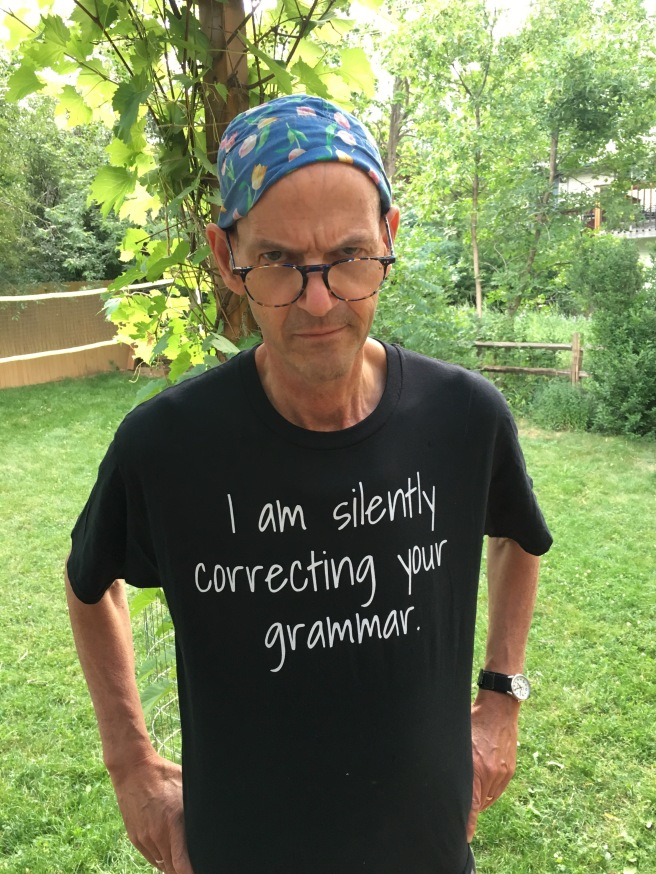 Shirt sent by my good friend Phelim. Margaret says she’s going to hold me to the “silently” part.

The blog posts already published are below, in reverse order — with the most recent on top. To read from the beginning go all the way to the bottom and read upward.

*Obscure literary reference. The Patna is the storm-wracked ship full of Mecca-bound pilgrims into a lifeboat of which the protagonist jumps at the start of Joseph Conrad’s Lord Jim. When he is rescued at sea and steams back into port, there sits the Patna, safe as houses. That Jim is branded a coward doesn’t mean I’m calling you a coward for jumping into the lifeboat. Just that had he had no lifeboat, Jim’s life would have depended on piloting the Patna home safely, as someone obviously was able to do. If you can arrange things so that your life depends on getting paid to write, you’ll vastly increase your chances of getting paid to write, as some people obviously are able to do.

One thought on “Wordwork: the art and craft of making a living as a writer.”